ReadInk Presents: Oddities and Obsessions
...for your edification and amusement.*

[* Please note that neither edification nor amusement are guaranteed. Your mileage may vary.] 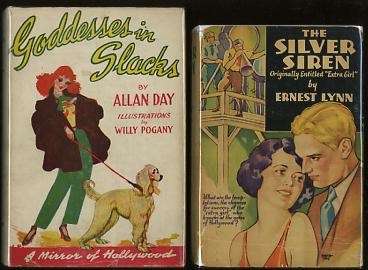 The "Hollywood novel," as a literary sub-genre, just fascinates the hell out of me. Great literature? Hardly! (Oh, OK, The Day of the Locust, maybe...whatever.) No, what I like about the "novel of Hollywood" is the parallel-universe aspect of it all -- the notion that these novels (even the trashy, badly-written ones...in fact, especially the trashy, badly-written ones) present a kind of Truth That Dares Not Speak Its Name about The Industry (as we all like to call it) or the "Hollywood community," so-called, in all its uniquely American diversity. Anyway, I've assembled a pretty sizable collection of these things, and I like to blather on about them here. 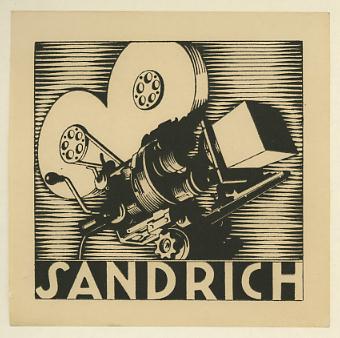 Bookplates and Bookseller's Labels give me an immense amount of pleasure, and whenever I discover a particularly cool-looking one, I just want to grab the nearest person and say "look at this!"  In the context of this website, that nearest person would be you!  So have a gander, if you're interested, at The Bookplate Graveyard or Vintage Bookseller's Labels. (The Southern California section of the latter page also serves as the portal to some information about old-time L.A. and Hollywood booksellers, in particular a swell guy named Stanley Rose.) 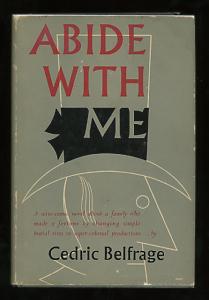 Obscure and Forgotten Novels of the Last Century (aka "Vintage Fiction") are the sort of books that most get my juices flowing, as both a reader and a bookseller. So I've set up this page to showcase some of my favorites. 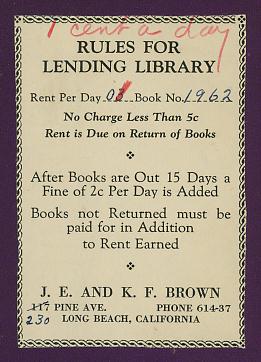 Rental Libraries. Now, combine the two preceding interests (old labels in books and obscure/forgotten novels), and you'll almost invariably find yourself, as I did, becoming keenly aware of the one-time prominence of book rental libraries in our culture. So I've just put up a brand-new page about them.  It's still "under construction," though, so be kind... 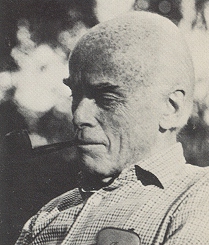 Cedric Belfrage (1904-1990) was a British "gentleman" who miraculously acquired some serious class consciousness, and after a stint as a film critic (among other things) eventually became a political journalist/editor in the U.S., co-founding The National Guardian, a leading voice of progressive dissent during the McCarthy Era.  This ultimately got him deported by the U.S. Government.  He also wrote a handful of really good novels along the way.  Here is a bit more about this fascinating gent. 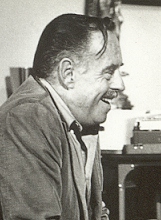 Frank Tashlin (1913-1972) was a unique figure in Hollywood cinema. He was a syndicated cartoonist, animation director at the major studios, scriptwriter for the Marx Brothers and Bob Hope, radio and TV director, and author of an exceptional series of illustrated books beginning with The Bear That Wasn't. As a Hollywood comedy film director from the late 1940s onwards, Tashlin was a major transitional figure, the link between the screwball comedies of Hawks and Sturges and the modern comedy film. Intrigued? Go  here.