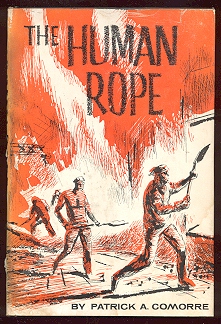 [moderate shelfwear, old sale price stamped on ffep, faint foxing on fore-edge; jacket water-damaged (especially along spine, which is faded, peeled, and has a couple of holes in it), internally stained with some bleed-through on rear panel and left edge of front panel; about the best that can be said for the jacket is that at least the front panel is complete and only moderately stained/ soiled]. As with many "write-what- you-know" vanity-press novels, this one appears to be derived from personal experience (in this case that of the author's father). The novel is set in the 1930's, and deals with the unionization efforts of workers in a Pennsylvania steel mill -- "men who are sick in body and heart of exploitation and are willing to risk their lives in the struggle to gain recognition of their rights as workers." Before one jumps to the conclusion that this is a "radical novel," however,take note that the greatest danger to the workers' organizing efforts is posed by "Mother Nellie Gore[!], the communist who controls the international, [who] has decided to turn the Amesbridge organization into a membership grab for the party. She intends to force a strike--and a bloody one--that will fail, blame the 'capitalist system' for the failure, and thereby recruit disillusioned workers as party members." (Damn commies!) The jacket blurb informs us that the author, "born in Pennsylvania, was taken to California at the age of nine because his father, a steelworker, was unable to go back to work locally after the big steel strike of 1933." Thus does life become art, sorta.