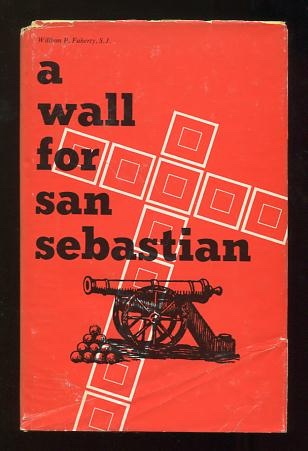 A Wall for San Sebastian

[a solid copy, but Good only due to some rust-colored staining along both hinges, wear to top edge of boards (almost as if the book had been shelved upside-down for a long time; boards exposed at a couple of points), top 1/8" of the spine is missing, pages browned; the jacket is moderately edgeworn, split (2") at bottom front foldover, mild diagonal crease along bottom of front panel, top quarter- inch of spine missing (no text affected)]. Novel about a former soldier, now a Franciscan friar, who arrives at his first mission to find it recently devastated by Comanche raiders. Faced with the need to rebuild the mission and to prepare for the return of the Comanches, "he found himself attacking the problems of San Sebastian more as a soldier than as a man of God. As the outside tensions mounted, so did the conflict in his own soul." Basis for the 1968 film GUNS FOR SAN SEBASTIAN -- although the movie mucked around with the plot quite a bit, making the book's friar a bandit and sometime revolutionary (played by Anthony Quinn) who is only mistaken for a priest when he arrives in San Sebastian and gets involved in its troubles. (A half-breed character played by Charles Bronson was apparently the invention of the filmmakers.)

Title: A Wall for San Sebastian

A Wall for San Sebastian