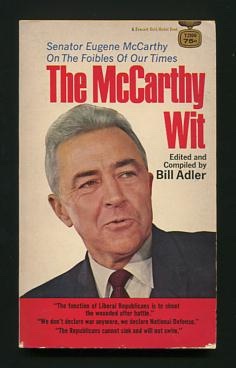 [nice tight copy, with some minor surface paper loss at bottom corners of front cover]. Mass Market PB "This is the McCarthy wit, ironic, meaningful, incisive. It is a wit that reveals a brilliant but gentle man whose ideas rallied millions of devoted followers. Like the humor of Churchill, Stevenson, and Kennedy [this in reference to the editor's previous compilations in this vein], the McCarthy wit is a joy to be heard and will be read and quoted for years to come. Selected from campaign speeches, media interviews and articles, letters and remarks to friends, addresses made as a Senator, [this book] comments on Lyndon Johnson, big league baseball, the Catholic Church, college students and labor leaders, Dean Rusk and George Romney, the farmers and the Republicans, the war in Vietnam, the Kennedys, the pollsters, the war on poverty, and the Presidency." The editor later added Richard Nixon, Ronald Reagan and others to his "Wit" series, of which this seems to be one of the scarcer entries. (Somehow I doubt that "The Bush Wit" will ever see the light of day.)