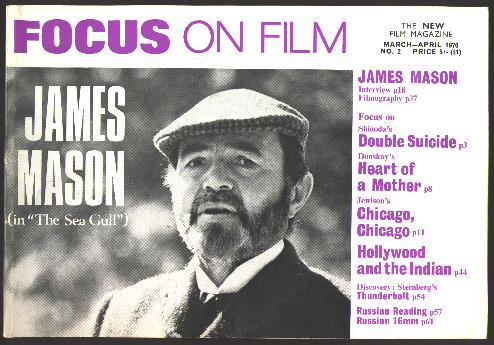 [mild overall wear, some creasing in covers]. (B&W photographs) James Mason (interview and filmography); "Hollywood and the Indian" by Robert Larkins; discussion of THUNDERBOLT (Josef von Sternberg); reviews of DOUBLE SUICIDE (Masahiro Shinoda), HEART OF A MOTHER (Mark Donskoy) and GAILY, GAILY [released in the UK as CHICAGO, CHICAGO] (Norman Jewison). [ It was the practice of this excellent publication to provide, along with each film review, filmographies and brief career summaries of the director and often other principals in the film under discussion.]