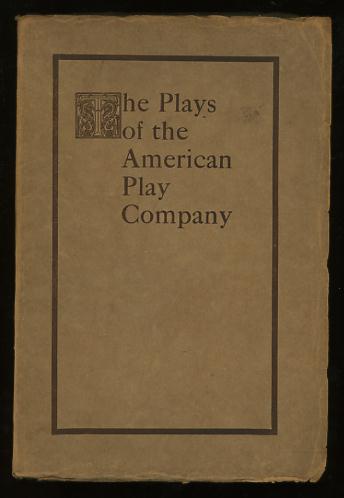 By: [The American Play Company]

[moderate edgewear, some soiling to page edges, general wear due to age but still quite solid]. "The American Play Company presents herewith its first annual catalogue of plays with a record of their original casts and productions, representing what it knows to be the pick and flower of dramatic material, now available for stock production in the United States. The American Play Company represents for stock plays the combined forces of the two best known and most successful dramatic agents in America, Miss Elisabeth Marbury, the oldest established play agent in the world, and Messrs. Selwyn and Co., who have achieved wonderful success in the last few years. The two offices combined control for stock the plays, almost without exception, of every prominent dramatic author in the world." Includes original casts of just over 200 plays, one per page, giving title, author, character names, actors' names, and "synposis of scenes" (actually just a list of the acts and their settings, e.g. "Act II: Vernon's Blacksmith shop, Adjoining His Living-room").