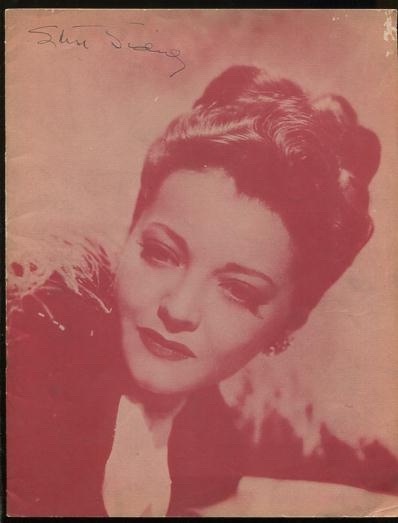 [moderate edgewear, a bit of insect-nibbling along edge of rear cover and at upper corner of front cover]. (B&W photographs) Souvenir program for the stage presentation of "Joan of Lorraine," originally presented on Broadway in 1946 with Ingrid Bergman in the title role. This program was for the touring company with Sylvia Sidney (who has SIGNED this copy at the top of the front cover, which is a full-page portrait of herself). Much of the program is about Miss Sidney herself: a brief biography, various photos, a center-spread of scenes from her movies,and a very short article, "How to Succeed in Films." The booklet also contains "The Story of Joan of Arc," as well as biographical sketches of author Maxwell Anderson and director Arthur L. Sachs, and portrait shots of some of the other cast members. (There are also two more signatures, those of Arthur Sachs and actress Ann Corey, both signed next to their photos.) (++)