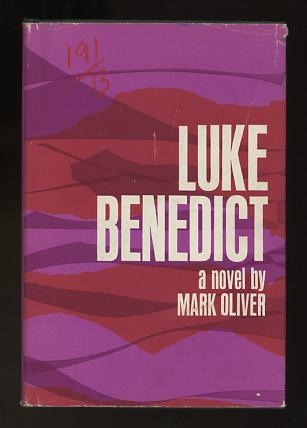 [solid copy, minor soiling to top edge, tiny nick in cloth at top of spine; jacket moderately worn at edges/extremities, a couple of tiny tears/chips along top edge of rear panel, short closed tear at top right-hand corner of front panel]. "The story of an angry young man who takes action and refuses to despair. Virtually abandoned at an early age by his father, reared by his uncle, a university professor, who compassionately tell's Luke's story, Luke fought the world for love. At school, at the university, he questioned the values held up to him, rebelling against and yet silently submitting to authority.Finally, forced abroad, he goes to Sicily and fights the hunger and poverty of the Sicilian poor. Later, in prison, in the Indian army, finally in his writing, again and again he is driven in the name of truth to defy the unthinking authority of small men. Luke survives a disastrous marriage to a Lesbian and becomes an Anglican priest [!]. In the church, though he finds wisdom to which he willingly submits, he finally discovers ranged against him the full array of the Establishment." The author, an English "writer, critic, broadcaster, and painter" per the jacket blurb, lived part of the year in the south of Italy, and had written at least one previous novel, "The Wanton Boys," about the poverty-stricken youth of that country. Given this book's subject matter (and its unaccountable scarcity), I wonder if it might not have had a bit of a cult following among the early-sixties college crowd.