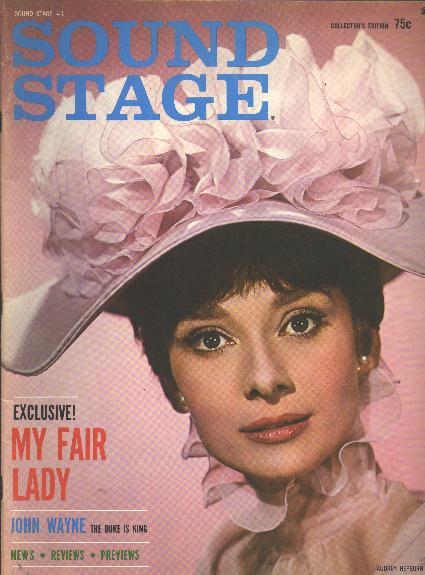 [light exterior wear, minor creasing at edges of rear cover]. (B&W/color photographs) First issue of this short-lived publication. About half of the 64-page, 9"x12" magazine is taken up by what looks suspiciously like studio flackery for MY FAIR LADY, including a behind-the-scenes production article and profiles of Rex Harrison, Andrey Hepburn and director George Cukor; this impression is only enhanced by the publisher's choosing to print a congratulatory letter to Jack L. Warner on the magazine's inside front cover, praising MY FAIR LADY as "the most thrilling motion picture event of this decade" and lauding Warner Bros. as "an industry leader." The rest of the magazine consists of a longish article about John Wayne, plus a gaggle of film reviews, book reviews, record notes, previews of new films, and a column, "Sound Stage Gossip," by Lorraine Gauguin. Sprinkled throughout are full-page color portraits of Angie Dickinson, Rex Harrison (by Cecil Beaton), Joey Heatherton, Audrey Hepburn (by Bud Fraker, who also shot the front and rear cover images), Jerry Lewis, and John Wayne (by Mal Bulloch). An uncommon piece of MY FAIR LADY memorabilia.