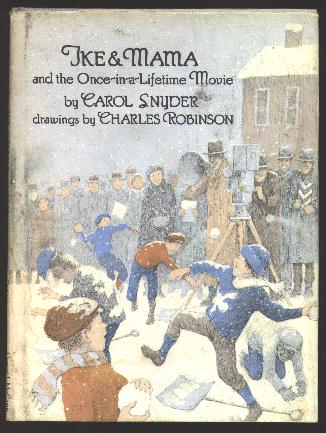 Ike & Mama and the Once-in-a-Lifetime Movie

[moderate shelfwear, small remainder(?) dot on top edge, slight rip in cloth at bottom edge of rear cover, "THANK YOU" stamped in red on ffep and front jacket flap, along with a "DISCARDED" stamp on the front pastedown and some miscellaneous writing on the ffep that indicates this may have once been part of a classroom book collection (I hestitate to call it "ex-library" since it otherwise bears none of the usual call numbers, stamps or labels); jacket shows some moderate soiling, and a light (mostly internal) dampstain around the spine (visible along lower part of rear hinge) that also slightly affects the book's covers]. In this children's story set in 1920, Ike Greenberg and his friends on East 136th Street in the Bronx hear that director D.W. Griffith is shooting a film (it turns out to be WAY DOWN EAST, with Lillian Gish) "only a bike ride away" (at his studio in Mamaroneck, New York), and they decide to earn some extra movie money by acting as extras in the film.

Ike & Mama and the Once-in-a-Lifetime Movie