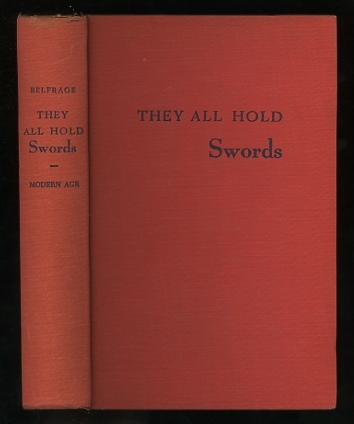 They All Hold Swords

(no dust jacket) [soiling to top edge, but otherwise a good solid copy, slight fraying to cloth at spine ends]. Of several autobiographical works turned out by this critic-journalist-social activist, this comes the closest to a traditional memoir -- and is also the most explicit about how he, "the third son of an English gentleman," managed to somehow acquire a social conscience despite a privileged upbringing. He "tells, in terms of his personal life and in a rich satiric vein, how he finally made good his freedom from the samurai snobberies of his class, from the inequalities of English society, and from the place assigned him by birth in the British Empire. He tells how he became a newspaperman, a globetrotter, a writer on movies; how he starved in New York and grew fat in Hollywood; how London life began to repel him and how the air of America alone would let him breathe." (Well, until America threw him out, at least, during the McCarthyite Fifties.) [This latter quote, by the way, is from the book's dust jacket, which is NOT present on this copy.]

Title: They All Hold Swords

They All Hold Swords