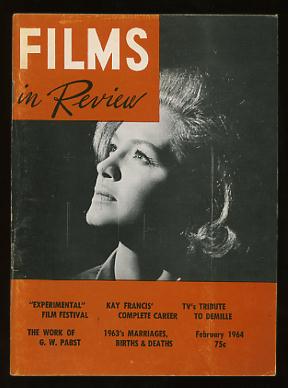 [good clean copy, some rubbing/scuffing to front cover, small surface-peel damage spot on rear cover]. (B&W photographs) Articles re: Kay Francis (career survey with filmography); German director G.W. Pabst (career survey with filmography); a TV "tribute" to Cecil B. DeMille; an international festival of experimental films held in Belgium. ("While some of the films reported on below had value, all too many had no value whatsoever, including those which propagandized for homosexuality and/or exploited the psychopathologies of beatniks.") ***NOTE that we have many more issues of this title (and other film magazines) in stock, and welcome your inquiries.

Publisher: New York, National Board of Review of Motion Pictures: 1964