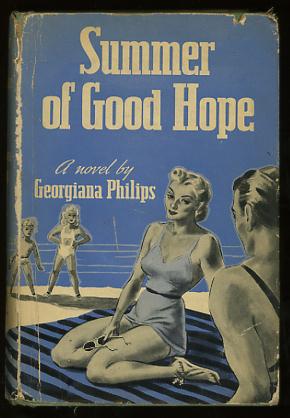 [ex-lending library book, worn but reasonably solid, not much in the way of markings (just a remnant of a removed label on the ffep), but with the jacket flaps securely glued down in that special lending-library way; the jacket is also internally reinforced with brown paper and well-worn at all edges]. "The Henry family's Vermont summer supplies the setting for this gay and discerning modern novel, which captures for the first time in American literature some of the flavor of Enid Bagnold's National Velvet. Caroline Henry, a young and pretty divorcee, has accepted a house, rent free, from some friends, and is working on her play. Her two children, Rosalind, aged nine, and Charlie, aged seven, are delighting in the summer's prospects. If all goes well, they home to acquire another husband for Mum. Rosalind wants more children in the family, and the time element is very important. Mum must be married again before it is too late." The author, per the jacket blurb, was a native of Irvington, New York, who spent her childhood summers in Vermont, later graduated from Vassar, was a divorcee, had a son and a daughter, and "now lives in Vermont." What an amazing string of coincidences! Wonder if she ever got remarried?