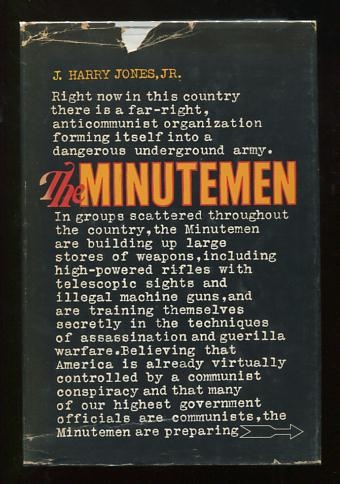 [solid copy, moderate shelfwear, light browning to page edges, gift inscription on ffep; jacket is a bit edgeworn, 1/2-inch triangular chip and associated creasing at top of front panel, a few other small tears]. "Right now in this country there is a far-right, anticommunist organization forming itself into a dangerous underground army. In groups scattered throughout the country, the Minutemen are building up large stores of weapons, including high-powered rifles with telescopic sights and illegal machine guns, and are training themselves secretly in the techniques of assassination and guerilla warfare. Believing that America is already virtually controlled by a communist conspiracy and that many of our highest government officials are communists, the Minutemen are preparing for a day in the near future when they will start shooting and lead a 'patriotic rebellion' against the United States government." Ah, yes, the good old days. So what else is new?