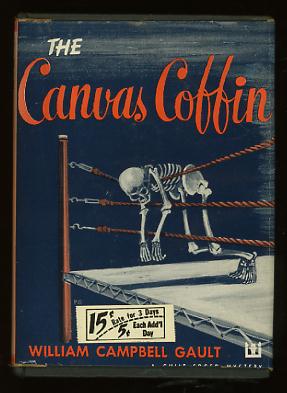 [ex-lending library book, stamped on endpapers but no other markings; book is mildly shelfworn but still a solid copy; jacket is attractive but with two problems: one, the flaps have been firmly glued down; two, the jacket was trimmed by about 1/8" at the top and 3/16" at the bottom, to fit inside one of those old-style jacket protectors; that jacket cover has now been removed and replaced with a mylar wrap-around, which makes the volume quite presentable, since the jacket itself is quite clean, albeit a bit wrinkled due to the presence of the paper backing (which couldn't be removed), and except for the presence of a small lending-library sticker on the front panel]. The author's third novel, a hard-boiled tale about a middleweight boxer who is implicated in the murder of a woman who he had taken home after a party -- but he was so punch-drunk that he can't remember whether he killed her or not, so he sets out on his own investigation. "Staged against the racketeering, merciless background of the prize ring this is a frightening and menacing tale of a fighter's struggle to prove his own innocence. With barely a clue to tell him how and where to begin, Luke Pilgrim has to find an answer which will lead him to his freedom or brand him as a murderer."