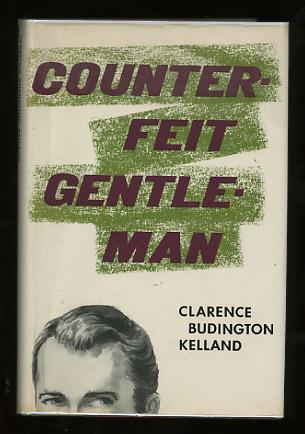 [suspected ex-library book, although no marking as such; however, the ffep has been removed (always a suspicious sign) and none too neatly, resulting in the half-title page also being partially detached and the weakening of the front hinge; otherwise a decent enough copy, with small tape marks at top and bottom of both covers, spine slightly turned; the jacket is quite nice, clean and attractive despite having been a little bit irregularly trimmed along the top edge, and consequently a tiny bit shorter than the book itself]. "When Artemus Baldwin knelt beside the bullet-ridden corpse in the Arizona desert and carefully extracted a wad of money from the dead man's mouth, he could have done without a witness as inquisitive as pretty Jick Roche. She made it hard for him to keep on pretending he was just a casual guest at a society picnic, especially when he had to pocket one of the bills -- a counterfeit one. If Artemus was anxious to have Jick think he was a perfect gentleman, he was even more eager to have the local underworld take him for a fugitive Chicago gunman. A Secret Service agent on the track of a gang of counterfeiters, Artemus knew his best chance of catching the racketeers was to join them."