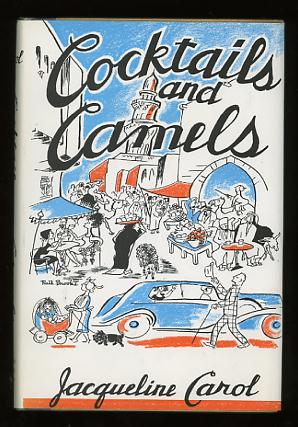 [good solid copy, moderate shelfwear, light soiling to page edges, small stain near bottom of fore-edge; the jacket is lovely (had been long protected with a jacket cover, now replaced), bright and fresh-looking, with just a trace of soiling to the rear panel]. Uncommon memoir, "a wonderfully gay love letter to Alexandria, Egypt," written by a young Lebanese girl who grew up there before World War II. "With an irreverent touch she gives an account of her school days in a hilariously archaic convent which frowned on all sports as immodest except for mountain climbing which was practiced in the basement. Then there was the new English girls' college which baffled the Lebanese society of Alexandria." Her life changed radically with the coming of World War II, when Alexandria was "overrun with British and American troops [and] charity called for entertaining convalescent soldiers," one of whom, an American captain, the author ended up marrying. She then "stepped into a new world of subways, no servants, and American-style housework -- a world for which her preparation consisted of a faultless education on nineteenth century French literature, perfect French, very English English, and fair Arabic." (The jacket blurb, in that wonderful high-concept way, further describes the book as "a Lebanese My Sister Eileen.") Many years later, the author, under the name Jacqueline Cooper, wrote and illustrated several bi-lingual children's books.