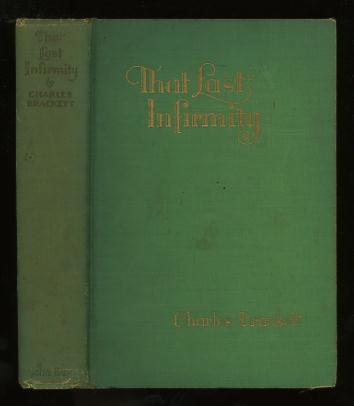 (no dust jacket) [worn but intact copy, moderate exterior soiling, front hinge a little loosey-goosey but not split or detached; spine cloth dulled, gilt rubbed off but lettering still readable; altogether a respectable reading copy, but no more]. Novel about a rich small-town widow, who devotes her energy and fortune to the task of making good marriages for her daughters -- complicated by the fact that they're Irish, y'see, and thus not "Society." The third of five novels by this one-time New Yorker drama critic, who subsequently decamped for Hollywood, where he found success as a screenwriter and later producer (collaborating with Billy Wilder on no fewer than 13 films, in a complicated but fruitful partnership once regarded as "the happiest marriage in Hollywood"). The book's title, since I know you're wondering, comes from Milton's "Lycidas" (" Fame is the spur that the clear spirit doth raise / (That last infirmity of noble mind) / To scorn delights and live laborious days").