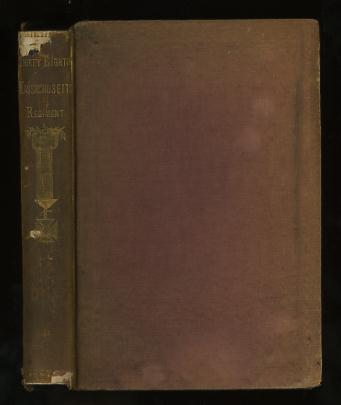 The Story of the Thirty Eighth Regiment of Massachusetts Volunteers

(no dust jacket, as issued; reddish-brown cloth (redder than it looks in the scanned image), gilt spine lettering and decoration) [heavily worn copy, with binding loss at both ends of spine, dampstaining to covers and endpapers, yet internally clean (pages NOT stained although some slight wrinkling throughout); the binding is solid, hinges not cracked or separated, making this an excellent (if not especially attractive reading/reference copy, and a good candidate for re-binding)] "An attempt has been made to present a connected and reliable account of the movements of the Thirty-Eighth Regiment of Massachusetts Volunteers during its term of service in the army of the United States. It has not been the purpose of the writer to describe the movements of armies, or chronicle the results of campaigns, except to illustrate more fully the doings of the regiment. ... Nothing has been drawn from imagination, and no attempt made at word-painting. ... During thirty-two of the thirty-five months' service here recorded, the writer was constantly with his regiment, and noted down the daily events, for the benefit of friends at home. For the remaining time...he is indebted to the letters, diaries and conversations of his messmates, Messrs. Joseph G. Bartlett, Richard A. Fitzgerald, and Nathaniel Monroe. He would also return his thanks to Adjutant Wellington, for valuable official papers, and for assistance, and to Lieut.-Col. Richardson, and Captains Rundlet, Bennett, Jewell, Howland, and Davis, for the muster-out rolls of the regiment." Approximately the last one-quarter of the book consists of the Regimental Roll, and there are several "In Memoriam" pages listing deaths from battle and disease. 308 pp.

Title: The Story of the Thirty Eighth Regiment of Massachusetts Volunteers

The Story of the Thirty Eighth Regiment of Massachusetts Volunteers