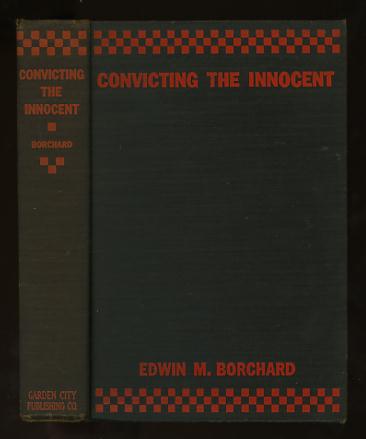 (no dust jacket) [good solid copy, moderate shelfwear, some spotting/scuffing to rear cover]. (B&W photographs) "The sixty-five cases, although susceptible of dramatic presentation, are set forth in simple narrative form to indicate how the error occurred and how it was later discovered and unraveled. The cases were taken somewhat at random, for cases of this type are not systematically reported. The research was usually begun from a clue often afforded by a governor's pardon, by the report of a trial, or by a newspaper item, and was then pursued by an examination of the record and by correspondence or interview with the attorneys for the prosecution and defense and sometimes with the presiding judge, governor, or pardon board. An earnest effort has been made to present an accurate account of the facts; after each case in the original edition there will be found a bibliography of the principal sources employed and of the persons to whom special acknowledgments are due." [Note that the bibliography and source notes referred to are NOT present in this edition, which was apparently intended for a less scholarly readership; on the other hand, as stated in an editor's note, the original edition (Yale University Press, 1932) did not contain the photographs which illustrate this volume.]