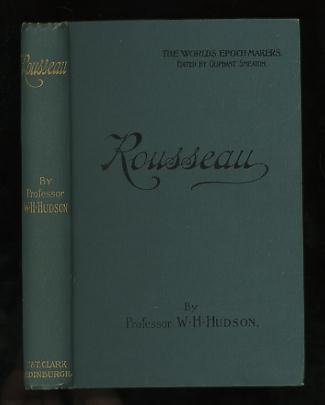 Rousseau and Naturalism in Life and Thought

(no dust jacket) [attractive volume, with some modest wear at extremities and minor soiling to page edges; gilt lettering on spine and black lettering on front cover all very strong; once a circulating copy in a private book club (see notes), with large label related thereto on the ffep, one-time owner's stamped in purple there and also on the half-title page]. (The World's Epoch-Makers) Series Study of the life and philosophy of Jean-Jacques Rousseau, by a writer who was well-known as a naturalist and ornithologist, and also wrote a number of novels -- only one of which has had much of an extended shelf-life, that being "Green Mansions," published one year after this book. The paper label which covers most of the ffep is headed "Book Club, 1904-5"; the members' names are printed beneath it, with a specified "To be Received" and "To be Forwarded" date (3 weeks apart) for each. Seventeen members are listed, including Mr. J. Ashton (probably the "James Gibson Ashton" whose name is stamped twice in the book; did he just keep it?) and a "Miss Allen," the only woman on the list. This is the true first edition of this book, preceding the November 1903 appearance of the American (Scribner's) edition by at least several months.

Title: Rousseau and Naturalism in Life and Thought

Rousseau and Naturalism in Life and Thought