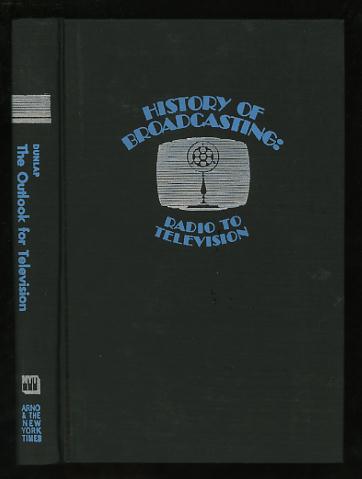 The Outlook for Television

(no dust jacket, as issued) [minor spotting on front cover, otherwise a nice tight clean book; NOT ex-library]. (History of Broadcasting: Radio to Television) Series (B&W photo frontispiece, other photos) Facsimile reprint of the 1932 edition, published by Harper & Brothers. The author was the radio editor of the New York Times, and the author of numerous tomes about the radio business. The frontispiece is a portrait photo of Guglielmo Marconi, reproducing his inscription to the author. The book's Foreword is by the legendary William S. Paley, President of the Columbia Broadcasting System. Also includes an interesting "Epilogue," in which "the possible effect of television on various fields of human activitity is discussed" by a group of luminaries including Real Admiral Richard E. Byrd, Dr. Lee De Forest and S.L. Rothafel (Roxy), the latter stating that "already in our plans for Radio City, television is given a place [and] I am inclined to believe that in five years, because our scientists work with such amazing rapidity these days, the stage and television will be one." The Appendix includes "Calendar of Wireless-Radio-Television," with significant dates from 640 B.C. to April 7, 1932, and a list of TV stations in the U.S. (all 38 of them) and Canada (7). Index.

Title: The Outlook for Television

The Outlook for Television