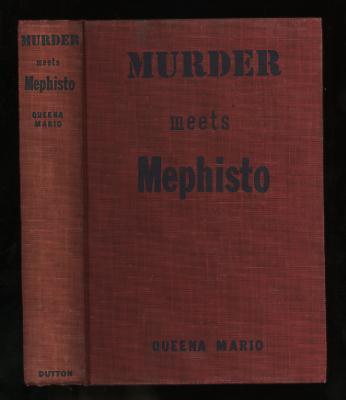 (no dust jacket) [ex-lending library book, although the only marks are two stamps on the ffep; other than that, the book is only lightly worn, and is unblemished except for some minor staining to the endpapers and a previous owner's signature in pencil upside-down on the rear pastedown; (the scanned image makes the book look rather mottled for some reason, when in fact it's uniform in color and quite nice-looking)] The second of three opera-themed mystery novels by an author who was herself an operatic diva, having made her Metropolitan Opera debut in 1922; she later became one of the nation' s premier voice teachers. The story is told in the first person -- the narrator/protagonist being a diminuitive (5-foot-3) long-time assistant at the Met, with frustrated dreams of becoming a composer -- and the backstage scenes definitely have the ring of truth. As the New York Times reviewer remarked, the author "knows the opera and its people as no outsider could know them."