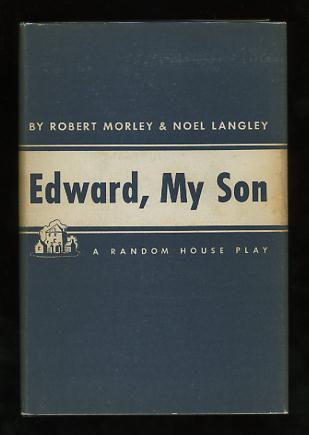 By: Morley, Robert, and Noel Langley

[nice clean copy, minimal shelfwear; slight browning to jacket spine and right edge of front panel, light soiling to rear panel, very minor wear at extremities]. (B&W photo frontispiece) Drama about a man whose obsession with making his son (never seen on stage) a success drives him to rather extreme measures. The original stage play starred co-author Morley, Peggy Ashcroft (to whom the play is dedicated), and Ian Hunter; only Hunter was tapped for the 1949 film version directed by George Cukor, with the two principal roles being assumed by the more movie-boxoffice-friendly duo of Spencer Tracy and Deborah Kerr. (Morley did get to essay the role he created one more time, though, on TV's "United States Steel Hour" in 1955.)

Title: Edward, My Son; a play in three acts