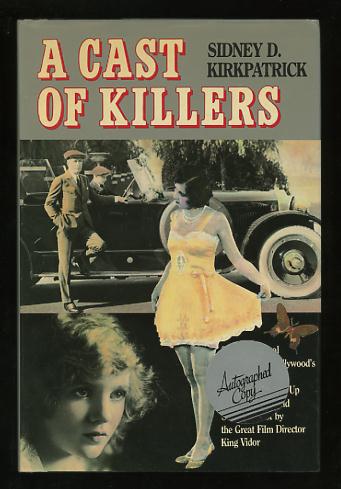 A Cast of Killers [*SIGNED*]

[minor shelfwear, top front corner bumped; jacket shows almost no wear, "Autographed Copy" label on front panel (which can be removed at buyer's request)]. (B&W photographs) SIGNED by the author on the title page. "The Sensational True Story of Hollywood's Most Scandalous Murder--Covered Up for Sixty Years and Solved at Last by the Great Film Director King Vidor." Well, true enough that the long-unsolved 1922 murder of director/ playboy William Desmond Taylor was "Hollywood's Most Scandalous Murder" -- equally true that director King Vidor was long obsessed with the case, right up until the time of his death in 1982 -- but it's evidence of its continuing fascination that despite the claims of this book, many people still don't think the case has been "solved at last." Still, a compelling read, even as you find yourself occasionally wishing that this terrific story had been placed in the hands of a somewhat more adept writer. Signed by Author

Title: A Cast of Killers [*SIGNED*]

A Cast of Killers [*SIGNED*]