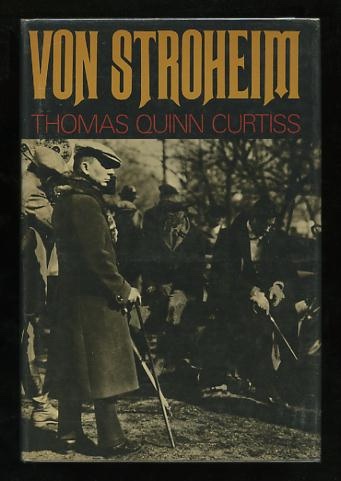 (price-clipped) [good solid copy, light wear at corners, a couple of tiny spots on fore-edge; jacket very slightly worn along top edge]. (B&W photographs) The authorized (more or less) biography of the actor-turned-director who made some of the most daring films of the silent era, but was ultimately ostracized for his extravagant ways. Author Curtiss, a one-time student of Sergei Eisenstein (and one-time lover of Klaus Mann), first met von Stroheim in 1940, and became a friend and confidant. The friendship deepened in 1950 when Curtiss settled in Paris and began writing for the International Herald Tribune; by his own account, he was "constantly in [von Stroheim's] company, seeing him almost daily" from then until the director's death in 1957. Their discussions included some talk of working together on von Stroheim's memoirs, but the only result was a half-hearted attempt that failed to interest any publishers. Curtiss obviously regarded himself as von Stroheim's official biographer, but subsequent researchers (notably Richard Koszarski) have demonstrated that he swallowed the filmmaker's own version of his life rather too uncritically.