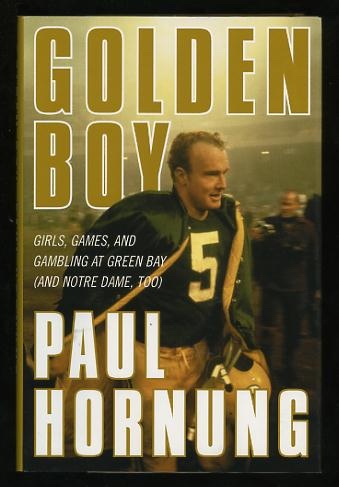 By: Hornung, Paul, as told to William F. Reed

[nice tight clean copy, appears unread, a couple of extremely light dents in top edges of covers; jacket shows only some very minor wrinkling at top of rear panel]. (B&W photographs) Memoir by the Heisman Trophy-winning running back who went on to become an NFL star for the Green Bay Packers, under legendary coach Vince Lombardi. However, his off-the-field partying, girl-chasing and gambling eventually caught up with him, and at the height of his career he was caught up in a gambling scandal and suspended from the NFL for a year. (This was a very big deal, I seem to remember -- I was ten years old at the time -- although in the context of the peccadilloes of some of today's top athletes, Hornung's transgressions seem kind of quaint. At any rate, he owned up to his misconduct, was reinstated -- reportedly thanks to heavy lobbying by Lombardi -- and went on to play three more seasons for the Packers.)