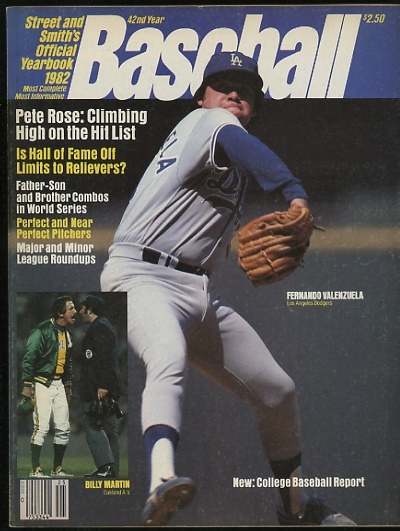 [minor rubbing to cover, long diagonal crease in rear cover; in all other respects a very nice item]. (B&W photographs) Venerable annual rundown of the year's prospects in baseball, mostly at the Major League level but also including a discussion of the minor leagues (focusing on hot prospects bound for the majors) and college baseball. Major stories on Los Angeles Dodgers pitcher Fernando Valenzuela, then heading into his first full year (after the strike-shortened 1981 season); Pete Rose ("Climbing High on the Hit List"); father-son and brother combos in the World Series. Includes a recap of the glorious 1981 World Series, in which the Dodgers whupped the Yankees.