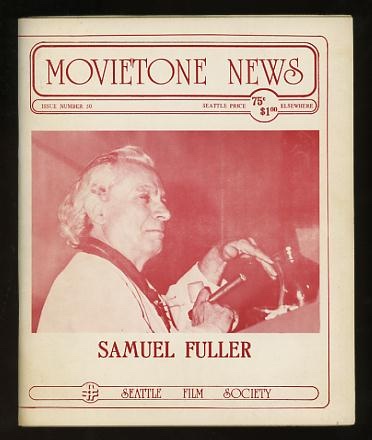 [no significant wear, but some browning to inside front cover from laid-in newspaper and magazine clippings]. (B&W photographs) A little more than half of this lively and engaging film journal is devoted to Fuller and his work. It contains an interview by Richard Thompson, focusing substantially on Fuller's early journalistic career; articles/analyses of I SHOT JESSE JAMES, THE STEEL HELMET and RUN OF THE ARROW; and an insightful account by editor Jameson of Fuller's visit to the Seattle Film Society for "46-1/2 exhilarating, excruciating, mind-boggling, adrenalin-jagging hours" in May of 1976. ("If it's hard not to get excited with a Sam Fuller movie in front of you," wrote Jameson, "it's impossible not to get excited around Sam Fuller. Excited and engaged." Truer words were never written!) Several contemporary reviews of THE BIG RED ONE are laid in to the magazine. Also in this issue: an interview with Lina Wertmuller