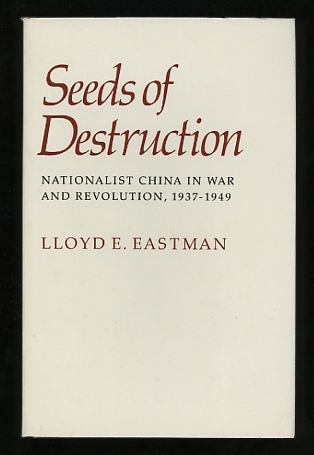 Seeds of Destruction: Nationalist China in War and Revolution, 1937-1949

[moderate wear to book along top and bottom edges, slight deterioration of cloth on front cover, otherwise a solid clean book; jacket shows only slight wear along top edge]. "In this study based on a wide array of hitherto unused documentary sources, the author delves deeply into the inner workings of the Nationalist regime and concludes that the Nationalists collapsed largely as a result of their own failings. Most strikingly, he uses the records and memoirs of the Nationalists themselves to document the weaknesses of the Nationalist rule. ... He carefully scrutinizes the relationship between the central and provincial governments, the plight of the tax-burdened peasantry in the Nationalist-held areas, the intraparty politics of the regime as expressed in the Youth Corps and the reformist Ko-hsin Movement, the deficiencies of the army during the wars against Japan and the Communists, the failure of the Gold Yuan currency reform of late 1948, and, finally, Chiang Kai-shek's own assessment of his army and the civilian branches of his regime during the final phases of the war."

Title: Seeds of Destruction: Nationalist China in War and Revolution, 1937-1949

Seeds of Destruction: Nationalist China in War and Revolution, 1937-1949