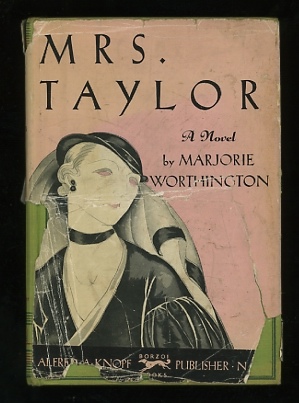 [ex-lending library book, solid and reasonably clean with light shelfwear, slight bumping to top corners, several library stamps inside, plus a bookseller's label from the same shop (Helen Phillips Books, New Britain, Connecticut) on the rear pastedown; jacket is securely glued down at flaps, with heavy wear, creasing, several chips at edges of front panel, entire bottom half of spine missing]. "From the top of her carefully waved hair to the tips of her expensive French pumps, Mrs. Taylor is as representative of a certain class of American women as Sinclair Lewis's Babbitt is of a type of American business man. Her life is filled with the usual round of unimportant engagements, but following her husband's death she feels something is lacking, a feeling which even a trip to Paris and an orgy of shopping cannot quite dispel. This story covers a year in the life of Mrs. Taylor and shows what happens to such a woman on becoming a widow." Uncommon novel by this journalist/author, who turned out quite a few novels (almost all with female protagonists) in the 1920s and 1930s, and was a kind of minor Lost Generation expatriate, due in part to her relationship with the notorious occultist/journalist/traveller/alcoholic William Seabrook. (They were married from 1935 to 1941, and she ultimately wrote a book about him, twenty years after he committed suicide in 1945.)