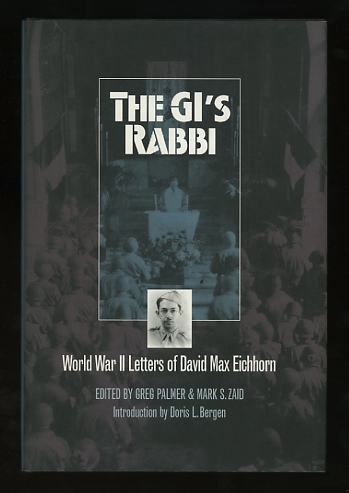 [tight, clean, unmarked copy with no discernible wear; jacket shows only the slightest bit of handling wear, don't squint and you won't notice]. (Modern War Studies) Series (B&W photographs) Compilation of the wartime letters of "a Jewish chaplain in the U.S. Army's XV Corps [who] saw action across France and into Germany until VE-Day and beyond. He was there at the Battle of the Bulge, participated in the liberation of Dachau, and became embroiled in the behind the scenes controversy that led to the execution of Private Eddie Slovik. Eichhorn's letters show us a devoutly religious man trying to cope with the perils of combat and the needs of his fellow soldiers. Because he was just one generation removed from being German himself, the letters also show how he came to terms with his own loyalties and hatreds while witnessing Nazi atrocities against European Jews."