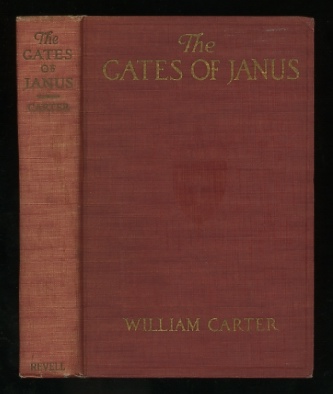 The Gates of Janus: An Epic Story of the World War

(no dust jacket) [very decent copy, moderate soiling to page edges, slight fading to spine cloth, front hinge cracked but not separated; gilt lettering still strong on front cover, a bit dulled on spine]. (six maps and battle field outlines) The history of World War I, rendered as an epic poem -- conceived as a "War Phillipic, as well as a War History," as the author explains in his Foreword, adding that "this whole work has been written while the War has actually been going on." This to explain why he chose to use "the present tense, largely, throughout the book, with all of its invective directed against a foe we were still fighting. Though the Armistice has now been signed and the War is over, he sends out the work in its original form, as a testimony not only to the determination of the Allies to win the final victory, but as a testimony against the atrocity and fiendishness with which the war has been prosecuted by our enemies," and so on in that vein.

Title: The Gates of Janus: An Epic Story of the World War

The Gates of Janus: An Epic Story of the World War