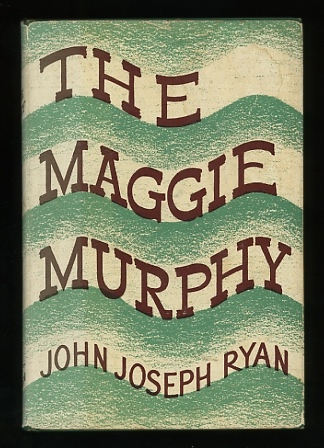 [good sound copy, minor wear to spine extremities, light dust-soiling to top edge, one-time owner's signature in pencil on ffep; jacket lightly soiled, a few tiny tears here and there, a bit faded at spine, faint dampstain near top of front panel]. The vessel referred to in the book's title "was the fantastic craft in which John Ryan and his friend Ed Braddock sailed from Puget Sound up to the fishing waters of Alaska. After hearing tall tales and get-rich-quick stories, they made up their minds that they were going to spend at least one season as big-time fishermen. They combed the beaches and tide flats near Tacoma for a suitable derelict. They found one. And for well over a year they worked day and night on the weather-worn hulk, patching, repairing, replacing, shoring, fabricating and creating a sea-going boat. [But] their make-shift masterpiece had one failing. It was irreparably lop-sided -- four inches wider on one side than on the other -- a misalignment acquired during the years the old hull had been ly8ing on its port side in the mud. However, by dint of prodigious bailing and the grace of God, John and Ed managed to get to Alaska. They fished with the best of them and packed a lifetime of entertainment and adventure into a few months."