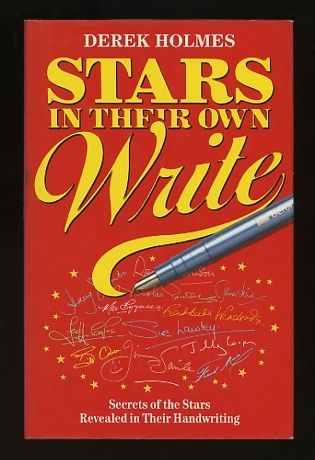 Stars in Their Own Write

[nice clean book, no discernible wear aside from one itsy-bitsy dent in bottom edge of front cover; jacket shows a tiny bit of edgewear, minor rubbing to rear panel]. (handwriting samples) The author collected handwriting samples (usually in the form of short personal notes to him) from several dozen British celebrities in various fields; each is reproduced in facsimile, followed by the author's analysis of the handwriting itself and of the personality of the individual (as derived from the handwriting). In each case, the concluding remarks come from the subjects themselves, who tend to say very British-sounding things like "I find the assessment most interesting" or "Jolly accurate -- well done." Most of the celebrities so analyzed will be unfamiliar to the average American; the more internationally-known subjects include Oliver Reed, Sir John Mills, Sir John Gielgud and Barbara Cartland

Title: Stars in Their Own Write

Categories: The Odd and Unusual,

Stars in Their Own Write