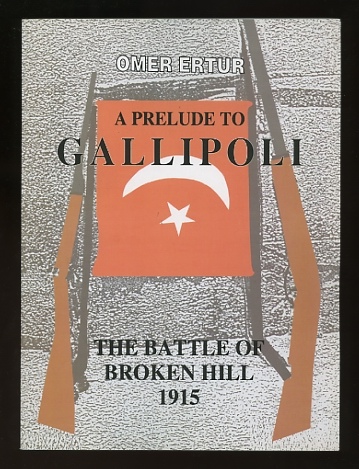 A Prelude to Gallipoli: The Battle of Broken Hill, 1915

[dog-earing and minor bending to top rear corner (cover and last few pages of book), otherwise a nice clean copy with no significant wear]. Trade PB (B&W photographs, facsimiles) History, both in narrative (written somewhat like a novel) and as a collection of reproduced source materials (mostly newspaper articles), of an "interesting but bizarre incident that had happened in 1915 in the Australian desert town of Broken Hill." Basically, a picnic train carrying 1,200 passengers was fired upon by two (two!) Turks, and because Turkey was an ally of Germany in World War I, this apparently (at least in the author's opinion) qualifies this as "the only enemy attack on Australian soil during the First World War." [The book itself was printed in Hanoi, and it should be noted that the photographs are of inferior pictorial quality, apparently being reproductions from other published sources such as newspaper stories.]

Title: A Prelude to Gallipoli: The Battle of Broken Hill, 1915

Publisher: Portland OR, Published By the Author: 2005

A Prelude to Gallipoli: The Battle of Broken Hill, 1915