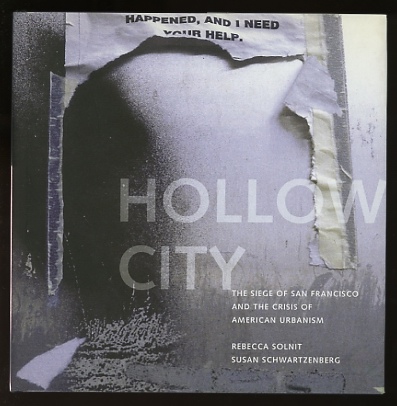 Hollow City: The Siege of San Francisco and the Crisis of American Urbanism

[nice clean book, small shallow dent at bottom of rear cover, no other significant wear; jacket shows a little surface rubbing, mostly to rear panel]. (B&W photographs) This collaboration between writer-historian Solnit and photographer Schwartzenberg examines what they see as the "cultural impoverishment" of San Francisco "as a result of new forms and distributions of wealth," specifically the boom economy (linked to venture capital and the internet) which characterized the city during the preceding two decades. The book "surveys San Francisco's transformation -- skyrocketing residential and commercial rents that are driving out artists, activists, nonprofit organizations and the poor; the homogenization of the city's architecture, industries and population; the decay of its public life; and the erasure of its sites of civic memory." (Whine, whine, whine -- try livin' in L.A. for awhile. We've got all that and more.)

Title: Hollow City: The Siege of San Francisco and the Crisis of American Urbanism

Hollow City: The Siege of San Francisco and the Crisis of American Urbanism