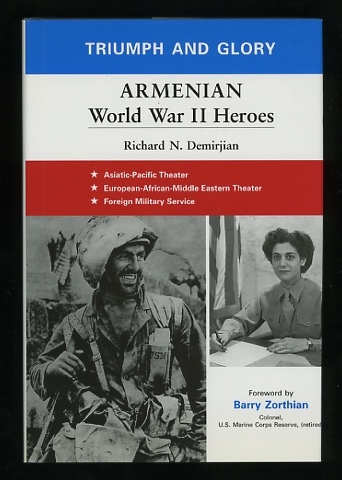 [lovely clean copy, with one tiny dent in bottom edge of front cover, no other significant wear; jacket shows only faint surface handling wear, soft diagonal creasing to front flap]. (B&W photographs, maps, facs.) INSCRIBED and SIGNED by the author on the half-title page. Profiles of 38 veterans of the war, based largely on interviews with the men (and a few women) themselves. The profiles are divided according to which theatre(s) of the war they served in, and include veterans of Iwo Jima and D-Day, recipients of the Medal of Honor and the Navy Cross, former prisoners of war, a survivor of the Bataan Death March, a member of Gen. Omar Bradley's intelligence staff, and a secretary to Gen. Dwight Eisenhower. Includes a program from a 1999 "Tribute to Veterans" held at the Ararat-Eskijian Museum of the Ararat Home of Los Angeles, laid in. Signed by Author