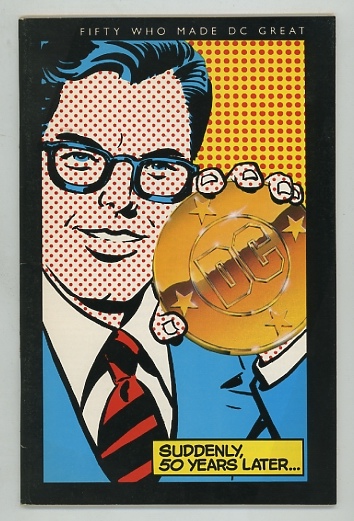 Fifty Who Made DC Great

(staped wraps, comic book size/format) [a nice clean copy, with just a bit of edgewear here and there]. Publication celebrating the 50th anniversary of DC Comics, including various short testimonials from various celebrities and cultural figures, but primarily devoted to highlighting the contributions of fifty entities -- both personal and corporate -- who have contributed to the company's growth and success. Each is given a single page, and they run the gamut from noted artists and creative people (Jerry Siegel, Joe Schuster, Bob Kane, Sheldon Mayer, Neal Adams, Denny O'Neil, Frank Miller, etc.), to some of their corporate people (founder M.C. Gaines, distributor Bud Budner, and others), various editors, actors who have notably played DC characters on radio and TV and in the movies (George Reeves, Adam West, Christopher Reeve, Linda Carter, etc.), companies like World Color Press and Licensing Company of America), such figures as super-fans Jerry Bails and Roy Thomas, and even products (Superman Peanut Butter!). Really quite an interesting and comprehensive look at the company's history. (It bears no printed price or UPC code, which would seem to indicate that it was produced as a promotional item, not intended for sale to the public.)

Title: Fifty Who Made DC Great

Fifty Who Made DC Great