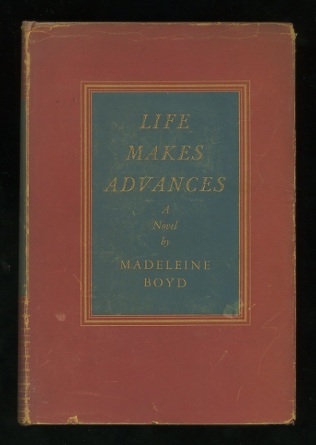 [a bit of spotting/soiling to page edges, light shelfwear to bottom edge, minor fading to cloth near top of spine; jacket shows some edgewear, darkened with age, various tiny nicks here and there]. A particularly fine example of a "novel of retribution," this roman a clef was penned by a French-born New York translator and literary agent (known as the person who first brought Thomas Wolfe to the attention of Max Perkins at Scribner's) after she had separated from her husband, Irish-born critic and essayist Ernest Boyd. In the novel she is "Nicole," a middle-class French girl who, while working in Dublin, falls in love with an "intellectual rebel," and through him meets "the group of Irish writers who were forming the new Irish literature -- A.E., Colum, Orage, Stephens and many others." Then the couple goes to America, where they pal around with H.L. Mencken and other literary types. (Ernest Boyd had written an admiring book about Mencken in 1925.) Time magazine derided the book as an "old wife's tale" and "a self-righteous exposure of everything from [her husband's] lack of ambition to his dirty hairbrushes," also sniffing that "such human documents should be reviewed by a psychiatrist" instead of a critic. Ouch.