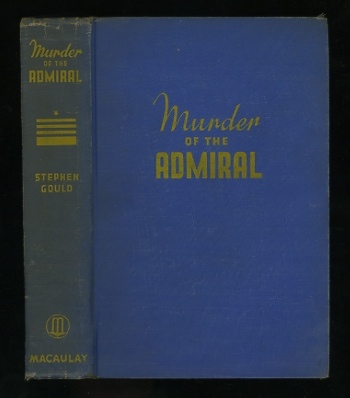 (no dust jacket) [worn but intact copy, apparently ex-rental library but with un-obnoxious traces (inked call number and label remnant on rear pastedown, faint stamping on top and bottom edges); text from front jacket flap is affixed to front pastedown]. Early novel by this former pulpster, the first of two to feature Sheridan Doome, "ace of the Naval Intelligence," who is notable (I guess) for having been badly disfigured in the explosion of a ship during the first World War, requiring the permanent placement of "huge steel plates over his entire chest and back." As the narrator describes him: "His face was just one ugly scar. For eyes he had only black blotches, crazy shaped; his ears were tiny pieces of things that hugged his bony white head. His mouth was without lips. .... His nose was a grotesque stump. If you think that Frankenstein looked horrible on the screen, you cannot imagine Doome." There's more -- but of course he also had "a brain so cunning, so astute, that there was not a man in the service who could match it," not to mention a "warm, sympathetic heart."

Title: Murder of the Admiral