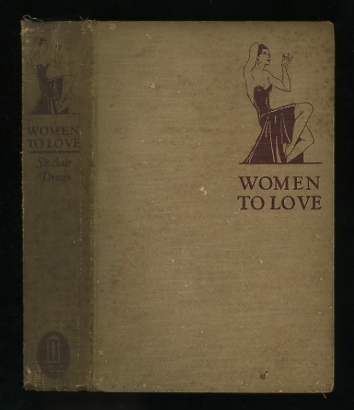 Women to Love: A Romance of the Underworld

(no dust jacket) [a pretty crappy-looking copy on the outside, if you want the truth (soiling, spotting, and much general wear to the covers, severe darkening to the spine), but internally quite OK, with both hinges intact, no markings in text, just one stamp (C.L. Konkel, Confectionary) on the front pastedown]. "The roar of gangster-guns, the dazzle of bright lights, the fever of pleasure, paid for with money earned in blood." You know, the usual Chicago gangster stuff, all apparently perpetrated (of course) by Italians -- Rocco, Guido, Enrico, Luigi, Lupo the Wolf, etc. The dame in the story is Rocco's wife Scarlet, "a woman born for love, who killed for love." Drago was a prolific novelist and short-story writer whose usual metier was western fiction, often set in the American Southwest; he also wrote under a whole mess of pseudonyms, my favorite of which is "Bliss Lomax." At the time this novel was written, he was in the middle of a five-year stint in Hollywood, during which he received only a handful of writing credits, on mostly obscure films; one has to wonder if this particular yarn might have been one that he couldn't sell to the studios. (One wonders about "Amour Press," as well, unmentioned in the standard reference guides to publishers of the era. Format-wise -- small illustration on front cover and spine, jacket blurb reprinted on the front, trashy subject matter -- this would appear to be a Macaulay book in all but name. Maybe Macaulay had a side imprint, for even LESS reputable stuff? Hard to imagine.)

Title: Women to Love: A Romance of the Underworld

Women to Love: A Romance of the Underworld