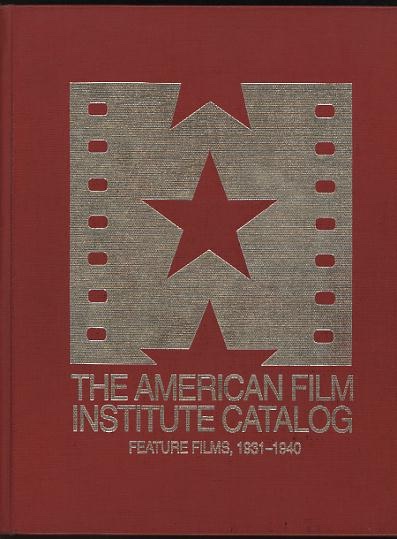 (no dust jackets, as issued) [all three volumes lightly shelfworn, with a little soiling to the page edges; the Indexes volume has a small spill-stain on the top edge, and all three volumes bear the original vendor's label on the ffep; all bindings are strong, and as far as I can see there are no markings of any kind in the text, although if you think I'm going to check all 3,789 pages, you've got another think coming, as they say]. Extensive, exhaustive, indispensible compilation of data on 5,525 feature films produced in the U.S. from 1931 through 1940. This was the second publication to appear after the revival of the AFI Catalog project (which had been moribund from the mid-70s through the mid-80s), and its superiority to the volumes on the 1960s and the 1920s (the first two produced, when the project was just getting under way in the early 1970s) reflects several things: the improved availability of archival film resources; a more fully-realized and coherent conception of the scope of the project; and of the improved computer technology which was brought to bear on the whole enterprise. This, in fact, was the volume with which (in my opinion) the entire series first came to its full flowering. Not only does it include comprehensive credits for each film (including untold thousands of "unbilled" contributions both in front of and behind the camera), a plot synopsis (whenever possible based on an actual viewing of the film, one aspect that distinguishes it from its predecessors), bibliographic citations, and extensive "notes." (These last are one of the book's great glories, and the reason that it' s just so much fun to sit down and browse through. Essentially, the "notes" are nothing more than a catch-all for virtually any bit of information on the film, no matter how arcane, turned up by the Catalog's intrepid researchers.) The whole thing is indexed six ways from Tuesday (personal name; corporate name; subject; genre; series; geographic location; songwriters and composers; authors of literary and dramatic sources) for maximum usefulness. (PLEASE NOTE that we have adjusted the price on this extremely heavy set of books to cover Media Mail shipping to U.S. destinations, and that NO extra shipping charges will be requested under those circumstances; for other methods/destinations, please contact us before placing your order, although I would suggest that if you're outside the U.S., you just don't buy these at all, because the shipping charge, unavoidably, will be quite high.)