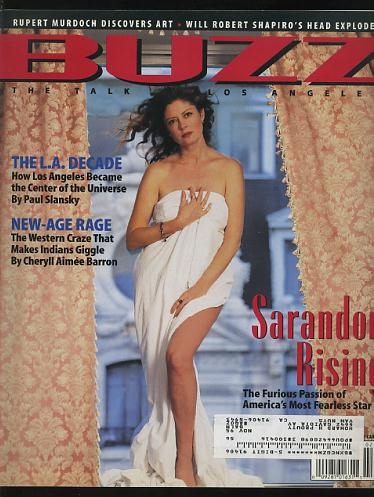 [nice clean copy, subscription mailing label at lower right-hand corner of front cover, but no significant wear]. (photographs, ads, graphics) Mid-run issue of this L.A.-centric magazine, subtitled on the cover &#34;The Talk of Los Angeles.&#34; (Except that mostly, it wasn't.) The cover story is an interview with actress Susan Sarandon, entitled &#34;The Anti-Star.&#34; Also in this issue: &#34;The L.A. Decade,&#34; an article positing Los Angeles as &#34;undeniably center stage for the ultimate fin de sicle experience -- the end of not just a century but a millennium&#34;; an article about the bar where the city's political movers and shakers hang out (); &#34;Mantra of the Moment,&#34; an article about Deepak Chopra's successful repackaging of ancient Hindu folk medicine, then &#34;the rage of the New Age crowd&#34; (whatever happened to them, anyway?); and &#34;The Good Cop,&#34; a profile by William Murray of ex-copy Steven Julian, who blew the whistle on the LAPD's beating of a burglary suspect and the subsequent cover-up of same.