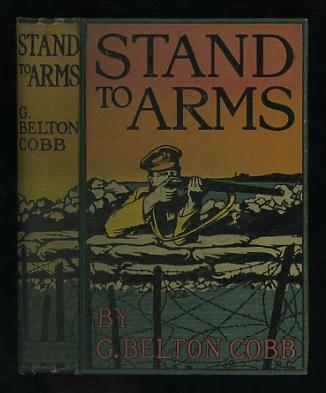 (pictorial cover and spine; no dust jacket) [attractive copy, light surface wear to covers, moderate bumping and a bit of wear at spine ends, offsetting/discoloration to endpapers; there is a crack in the binding between pages 128 and 129, which has caused one of the illustration plates to become partially detached]. (8 B&W plates) Novel (I guess) about a young Englishman's service in World War I, as a member of the King's Own Eatonshire Regiment. (The author himself, per the title page, was "formerly of the London Irish Rifles.") Presumably autobiographical, it reads like a fictional narrative (the protagonist is named Allan Webb), although there is also a combined Glossary and Index. The author, an assistant to publisher George Heinemann in the 1920s, subsequently (as "Belton Cobb") became a prolific if rather undistinguished mystery novelist. [The book itself bears no date; possibly a somewhat later printing, as at least one other copy noted has marbled endpapers, not present in this book.]