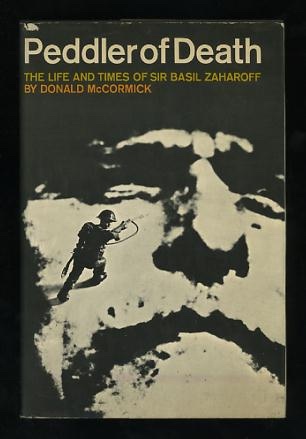 Peddler of Death: The Life and Times of Sir Basil Zaharoff

(price-clipped) [good solid copy, light dust-darkening to top edge, internally nice and clean; jacket a little edgeworn, light soiling, one small closed tear at bottom of rear panel]. (B&W photographs) "A fascinating portrait in evil, [this book] is the biography of the most cynical, powerful, and successful arms merchant of all times. The sinister influence behind kings, statesmen, parliaments, and entire nations during the eventful turn of the century, Sir Basil Zaharoff secretly and profitably supplied arms for the wars in South Africa in the 1890's, the Boer War, the Russo-Japanese War, the Balkan Wars, and ultimately, World War I. Incredibly enough, while this dealer in death was amassing an enormous personal fortune through his dubious transactions, he was also enjoying the admiration of his contemporaries, becoming a French citizen, a Chevalier of the Legion of Honor, and a Knight of the British Empire." (Why "incredibly"? War is big business, and an awful lot of people admire a successful big businessman.)

Title: Peddler of Death: The Life and Times of Sir Basil Zaharoff

Peddler of Death: The Life and Times of Sir Basil Zaharoff