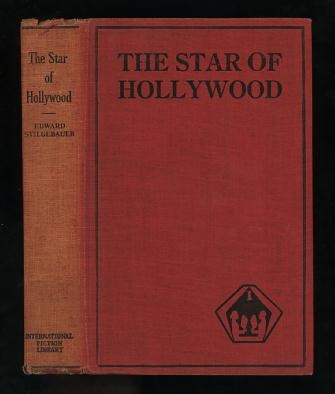 The Star of Hollywood

By: Stilgebauer, Edward (translated from the German by E.E. Wilson)

(no dust jacket) [minor soiling to red cloth, a few tiny tears in cloth at spine ends, but generally in better shape than this cheaply-produced volume is usually found]. "This story tells of a young film actress at Hollywood, who, in taking the part of the slave attendant on Cleopatra, has to apply the poisonous snake to the breast of a famous star. In doing so, she pierces her with a syringe containing a deadly dose of morphia. Breathless incidents follow...." First published in 1927. I personally have always cherished this book for the hysterical (and geographically-challenged) opening paragraph: " Hollywood! On the Pacific, outside the gates of Los Angeles in California, it stands! The City of Illusions! The Cosmos of Cardboard! The Union's greatest sensation!" That's my town, all right.

Title: The Star of Hollywood

Author: Stilgebauer, Edward (translated from the German by E.E. Wilson)

The Star of Hollywood