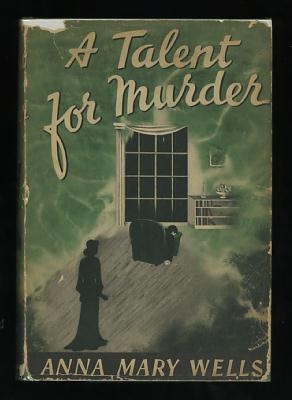 A Talent for Murder

[spine slightly turned, small stain on top edge, some discoloration to pastedowns and endpapers; jacket is heavily edgeworn, little bits of paper loss at spine ends and several corners, shallow chip at upper left-hand corner of front panel]. A psychoanalytical murder mystery, in which the accused murderess doesn't actually know if she's guilty or not. Although she testifies to her innocence in court and is acquitted, every night "she dreamed an altogether different story of what had happened, until at last she did not know which version was true and whether the truth might not be still another story." She consults a psychiatrist, Dr. Hillis Owen, who attempts to penetrate "the shadows of [her] twisted mind" and figure it all out. (When published in paperback, this was billed as "A Dr. Hillis Owen Detective Story," like there had been others, but I don't believe there were; Hubin lists four additional titles by this author, but none of them appear to have featured this character.)

Title: A Talent for Murder

A Talent for Murder