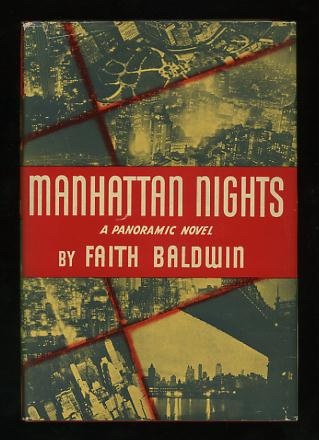 [a lovely clean copy, with no significant wear but the very faintest spotting to the bottom page edges (less squinty eyes would call it Fine with nary a pause); jacket lightly soiled at the rear panel, with some light wear and a couple of tiny tears along the top edge, very attractive nonetheless]. "A Panoramic Novel," sayeth the dust jacket -- which is another way of saying that the ever-popular Miss Baldwin (or her publishers) was not above pulling one of the oldest New-York-novelist tricks in the book, that of concocting a stew of "interrelated stories" about a wide array of urban characters, from sophisticated Social Register types to "racketeers, taxi-drivers, maids, actors, secretaries, and interns," in the hope that it would magically bubble into a novel with a unifying central theme. The double-copyright date, though (1936 and 1937), blows its cover: all eight stories in this book were published in Cosmopolitan as novelettes (most under the same titles) from October 1936 through May 1937; were they "interrelated" at that point, I wonder, or was their anthologization the equivalent of a literary shotgun marriage? (One story, by the way, "Comet Over Broadway," was filmed under that title in 1938.) And just to tie up the packaging in a nice neat bow, at the very end of the book is a three-page preview of her next novel, "Twenty-Four Hours a Day," also blurbed on the rear jacket flap.