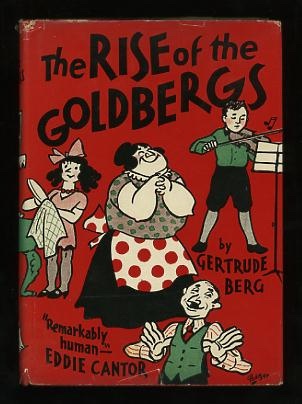 The Rise of the Goldbergs

(price-clipped) [a lightly-worn book, with a minor bump to the top rear corner and some slight dust-soiling to the top edge; jacket is bright and colorful, with some very minor paper loss at spine ends (no loss of text), some internal dampstaining to the rear panel with only negligible effect to the exterior]. (frontispiece photo of Gertrude Berg) "The Rise of the Goldbergs" (the title was eventually shortened to simply "The Goldbergs") debuted as a 15-minute weekly program on NBC radio in November of 1929, and was an immediate hit. The show became a daily broadcast in 1931, the same year this book appeared, and by which time (per the book's introduction) NBC had received "so many requests .... for copies of the episodes that it has been found advisable to publish the first volume with subsequent volumes to follow." (Essentially, then, these are radio scripts rendered into short-story form.) The radio series ran through 1946 and was subsequently adapted for both Broadway ("Molly and Me") and as an early TV series -- but interestingly, although the intro to this book even mentions "numerous offers...from moving picture producers," they didn't get around to making a "Goldbergs" movie until 1950. (One can easily imagine Samuel Goldwyn sagely declaring the property "too Jewish!") The colorful dustjacket, with a cartoon illustration of the Berg clan, is a genuine rarity.

Title: The Rise of the Goldbergs

The Rise of the Goldbergs